Meet Darryl Johnson ➡️ proud Hockey Dad and a Local Hockey Hero presented by Wawanesa Insurance! Darryl is a #NHLJets Hockey Academy parent, and is always going above and beyond to support his daughter on and off the ice.

Going into Game 7, the news could not have been much better for the Pittsburgh Penguins: Sidney Crosby, Tristan Jarry, and Rickard Rakell would all be returning to the lineup for this do-or-die matchup with their divisional foe. Kreider opened the scoring, but Danton Heinen was able to tie things up with a power-play goal before the end of the opening frame. In the 2nd, Jake Guentzel continued his white-hot pace, netting his EIGHTH goal of the series. The only other Penguins players to score eight goals in a series? Mario Lemieux and Sidney Crosby. The franchise record for goals in a series is nine, held by Lemieux. The goal itself was a work of art-- a bouncing puck, kicked up by Guentzel's skate, and batted over the shoulder of Shesterkin to give the Penguins a 2-1 lead. It truly was a work of art. Miller knotted things back up, 2-2, shortly after that, but Evan Rodrigues would not let the Penguins go into the intermission with a tie. While killing a penalty, Rodrigues got his sti...

Connor McDavid Turns On The Jets And Scores Beautiful Wraparound Goal To Open Scoring vs. Kings

Watch as Edmonton Oilers captain Connor McDavid turns on the jets to score a beautiful wraparound goal past Los Angeles Kings goalie Jonathan Quick to open up the scoring in Game 6.

Could big changes be on the horizon for Jets after missing playoffs?

The disappointment from missing the playoffs will have lasting effects for the Jets which will undoubtedly spark wholesale evaluation of the team from top to bottom. That's Hockey examines the changes that could be on the way in Winnipeg.

Ground Control wraps up the 2021-22 Regular Season as Tyler, Jamie and Mitchell discuss the four-game win streak to end the season, Kevin Cheveldayoff's end of year media session, pick their un-sung heroes on this year's team and finally they bid Dennis Beyak goodbye as the play-by-play broadcaster hangs up the headset after 11 seasons as the television voice of the Winnipeg Jets. Stay tuned for more episodes of Ground Control periodically throughout the off season as JetsTV aims to keep you updated on all things Winnipeg Jets!

Cheveldayoff: No trade request from Scheifele, meeting to come

Winnipeg Jets general manager Kevin Cheveldayoff said Monday forward Mark Scheifele has not requested a trade after casting doubt on his future with the club on Sunday. Cheveldayoff added, however, that he had not yet spoken to Scheifele for his exit interview.

Player of the Month fuelled by freshii: Nikolaj Ehlers!

🎉 Nikolaj Ehlers is the April Player of the Month fuelled by freshii! 7 goals, 8 assists, and 3 multi-point games for Fly to close out the season 🚨 Claim a special offer HERE ▶️ https://wpgjets.co/Freshii

Is it possible to win 'Biggest Sweet Tooth' AND 'Biggest Health Nut' ? We asked your #NHLJets who is most likely to be caught with their hands in the cookie jar, and which teammate is most careful about the food they eat!

To our passionate, incredible fanbase; Thank You. Through the highs and lows, wins and losses, we wouldn't want to do any of it without you. We are so happy to have welcomed you back this year 💙

Scheifele non-committal on future in Winnipeg: I have to see where this is all going

When asked about his future with the Jets, Mark Scheifele said that while he loves Winnipeg, there are a lot of questions that need to be answered about the direction of the team moving forward.

Blake Wheeler, Dominic Toninato, and Kyle Connor all scored goals less than five minutes apart in the third period to help the Jets end the NHL's regular season on a high note with a big comeback win over the Kraken.

How to enter a wedding reception like a legend (Video) 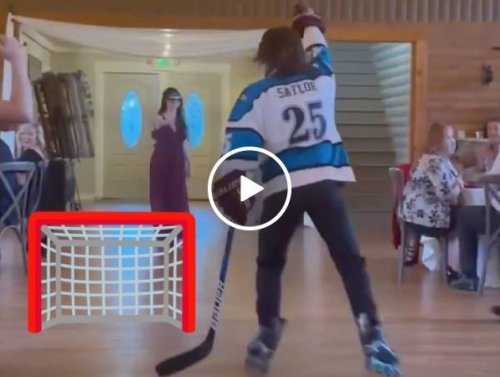 Via: Dom Panetta A member of the Vail Yeti hockey teams enters his friend’s wedding with a legendary tribute to the Teemu Selanne celly. If you want to be featured on theCHIVE and on our social media pages, upload your best original videos <a href=”https://i.thechive.com/video/upload&#8221; target=”_blank” rel=”noopener noreferrer”>HERE</a>. You might even pocket some cash in […]

Erik Johnson's stumble in overtime nearly led to the winning goal for Winnipeg, but his goaltender bailed him out.