NHL Network/NESN analyst Billy Jaffe joined Brian Duff and Marty Biron on this week’s The Instigators Overtime podcast. They discussed their history working with one another including some legendary pickup hoops games. Jaffe conducted his Bruins exit interview (11:30) with the guys including discussion of Patrice Bergeron’s decision (13:00) and an examination of the future of the Atlantic Division (15:00). Could the Sabres take the next step to contend (16:45)? What happens next in Toronto (19:30)? Who are the available goalies this summer and could Linus Ullmark be moved (21:00)? Who stays and who goes in Pittsburgh (26:30)? Will the Red Wings be adding this summer (31:00)? What happens in Minnesota with Kevin Fiala (37:00)? Billy, Duffer and Marty each identify a few people that made an impact on their broadcasting careers.

Emily Kaplan on Reporting for ESPN | The Instigators Overtime Ep. 28

ESPN NHL reporter/writer Emily Kaplan joined Brian Duff and Marty Biron on this week’s The Instigators Overtime podcast. She described what it’s been like covering the Stanley Cup Playoffs so far including her crazy travel schedule and some her favorite stories that have emerged. Kaplan discussed her career, the changes with ESPN’s new broadcast rights deal, being between the benches, what it’s like working with colleagues like Ray Ferraro and her favorite drink. She also previewed three big offseason storylines to watch and some upcoming stories for ESPN.

Brian Duff and Marty Biron are joined by SkateSkins owner Matt Keeler on this week’s The Instigators Overtime podcast. He explains where he got the idea for SkateSkins - a customizable accessory designed to fit all makes and models of hockey skates. Keeler describes how he got connected with Sabres defenseman Rasmus Dahlin, produced the Rick Jeanneret themed SkateSkins, and the thrill it was seeing Dahlin and other Sabres wearing them during warmups on the night of RJ's last call. He tells us how he started the business and some of the biggest challenges he faced.

Buffalo Sabres head coach Don Granato addressed the media after the conclusion of the 2021-22 season. He reflects on his message to the players and how they embraced the culture he and GM Kevyn Adams are building in Buffalo.

Buffalo Sabres defenseman Owen Power spoke to the media during locker cleanout day on May 1, 2022. Topics include: learning from his first 8 games as a Sabre, plans for the offseason, defending against the league’s top players, being accepted into the locker room from day 1, areas of his game that we would like to improve on, and more.

Buffalo Sabres defenseman Mattias Samuelsson spoke to the media during locker cleanout day on May 1, 2022. Topics include: potentially joining the Rochester Americans for their playoff run, becoming a full time NHL defenseman, defending the top players on other teams, the different personalities in the locker room, embracing the community in Buffalo, Don Granato’s coaching style, and more.

Peyton Krebs All In On Buffalo | Buffalo Sabres

Buffalo Sabres forward Peyton Krebs spoke to the media during locker cleanout day on May 1, 2022. Topics include: joining the Rochester Americans for the AHL playoffs, playing center and wing, going through a trade and becoming a Buffalo Sabre, embracing the City, the culture in the locker room, Don Granato’s leadership, and more.

Buffalo Sabres forward Dylan Cozens spoke to the media during locker cleanout day on May 1, 2022. Topics include: learning from his first full 82 game season, the tightness within the locker room, working to convert on scoring chances, becoming a reliable and trustworthy player in the defensive zone, being a part of the young core of the team, his plans for the summer, and more.

Buffalo Sabres forward Victor Olofsson spoke to the media during locker cleanout day on May 1, 2022. Topics include: what the team needs to do to take the next step, becoming a consistent player, working on his 5-on-5 game, dealing with injury this season, his success on the power play, the brotherhood within the locker room, and more.

Buffalo Sabres defenseman Henri Jokiharju spoke to the media during locker cleanout day on May 1, 2022. Topics include: his season as a whole, playing with Owen Power, being part of a young defensive group, becoming a consistent & confident player, thoughts on Rasmus Dahlin, playing in the World Championship in his hometown, and more.

Tage Thompson Excited To Be A Sabre | Buffalo Sabres

Buffalo Sabres forward Tage Thompson spoke to the media during locker cleanout day on May 1, 2022. Topics include: having a career season, the switch to playing center, being empowered and encouraged by head coach Don Granato, feeling hungry for more next year, wanting to be a Sabre for a long time, what he will work on this summer, the brotherhood in the locker room, and more

Malcolm Subban sang The Star-Spangled Banner prior to our game against the Blackhawks on April 29, 2022. Hear from him how it went down!

Rasmus Dahlin On His Year Of Growth | Buffalo Sabres

Buffalo Sabres defenseman Rasmus Dahlin spoke to the media during locker cleanout day on April 30, 2022. Topics include: becoming a leader on this team, reflecting on a year of growth, all-star weekend, learning to block out the noise and go out and play, gaining confidence from the coaching staff, having team success down the stretch, getting a little bit better every night, and more. 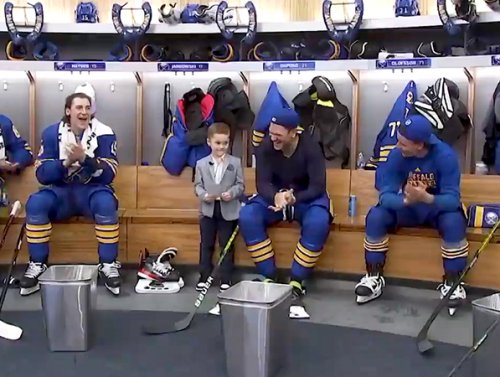 NHL Power Rankings: How Do Teams Stack Up After the First Week of the Season?

What do we make of Buffalo’s impressive start? Plus, are the Panthers a legitimate threat to the Lightning’s divisional dominance?View the original article to see embedded media.Just as everyone expected, the Sabres—yes, the same Sabres who finished last season with a league-worst 15 wins—have been one of the hottest teams to start this season, undefeated through their first three games.

Paul Carey and Michael Grabner scored in the first period for the Rangers, who improved to 4-0 in regular season outdoor games.

Justin Faulk has been searching for his scoring touch for a while, so Saturday night was pretty sweet.